Early morning on Bob’s birthday I heard the grape harvesting machine go through the village. I didn’t jump out of bed to see where it was going as I figured it was probably done for the night. I attempted to go back to sleep when I heard a sound…it was the sound of rustling leaves. I thought to myself (gee I guess that is what one does…thinks to themselves. I mean you don’t think to someone else), anyway…the sound of rustling leaves and the hum of the machine meant it was working on the plot just outside the cellar. So, I got dressed and headed outside. 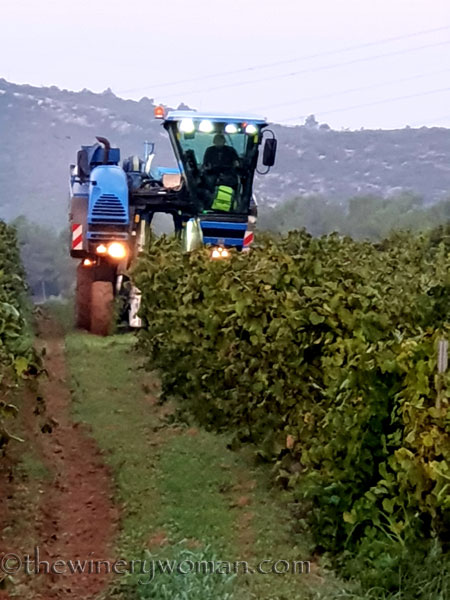 To say I was excited would be an understatement. I have wanted to see this machine in action since last harvest. I wrote about it here. 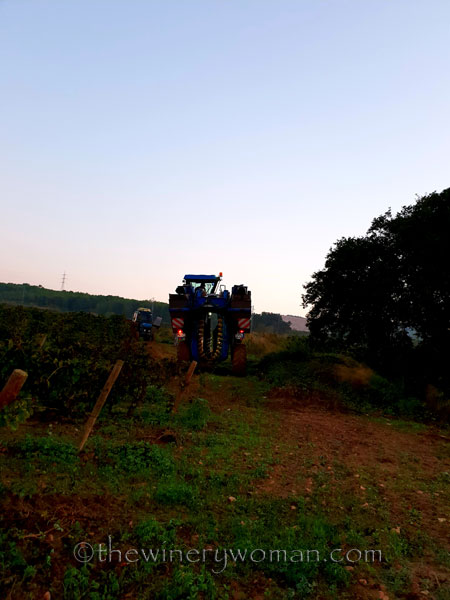 Timing was everything because shortly after I arrived it came down the row to unload into the trailer. 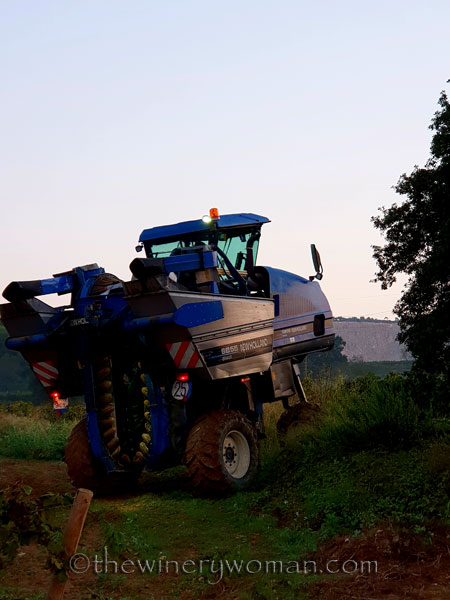 The grape harvester gets ready to start down the next row while the trailer is taken back to the cellar to unload. 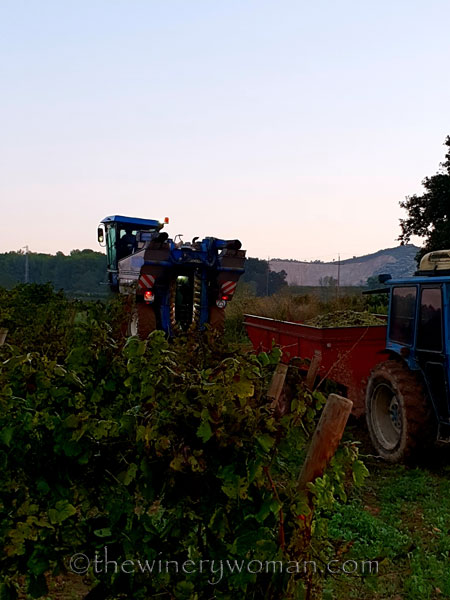 You don’t want to get too close to the back of the machine as it spits out bits of leaves quite a far distance. 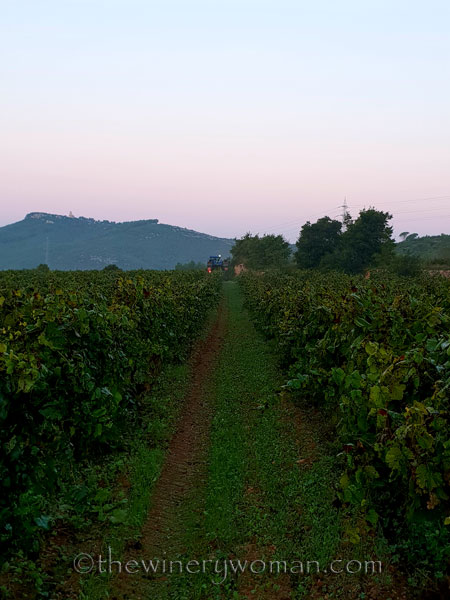 The next trailer gets into position. 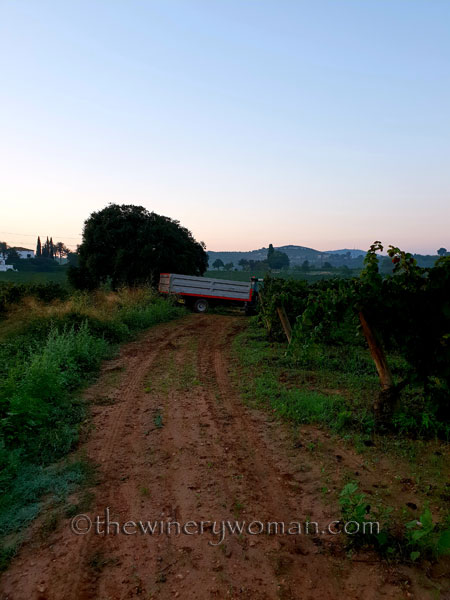 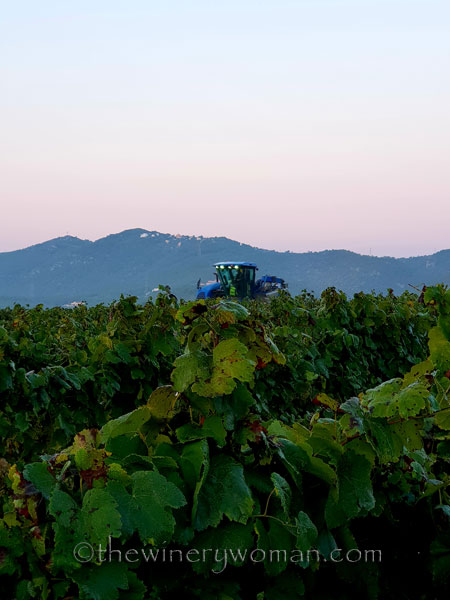 Precision is needed in operating this machine. It must do some tight maneuvering to turn into the next row.

This is what the bunches of grapes looks like when the machine is done. As cool as I think the machine is and what it does, it certainly doesn’t replace hand-picking by humans. The machine cannot select the best grapes like humans can. It is used at Viladellops only on some plots and only on those where the grapes/juice are being sold to another winery. 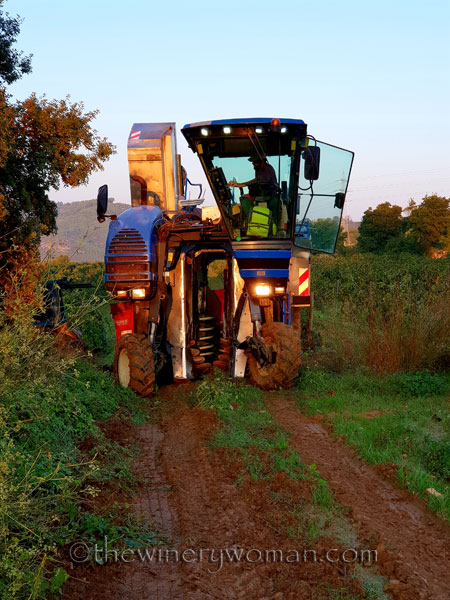 I will tell you that I felt like it was my birthday because I got what I had wanted for a while. I was like a little kid.

I headed through the vines in the direction of the sunrise. 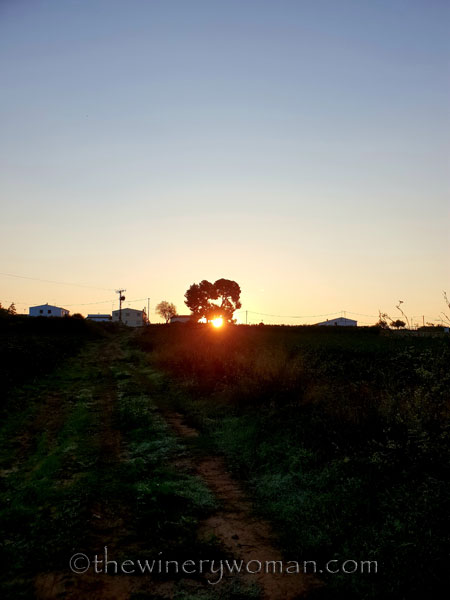 I turned around for one last look. I smiled when I noticed the sunrise glinting off the trailer and it dawned on me (pun intended) that I really am a country girl if I appreciate something simple like that.

I took a couple of other photos of the sunrise to share with Bob the birthday boy, knowing that he was sleeping soundly through all of this. 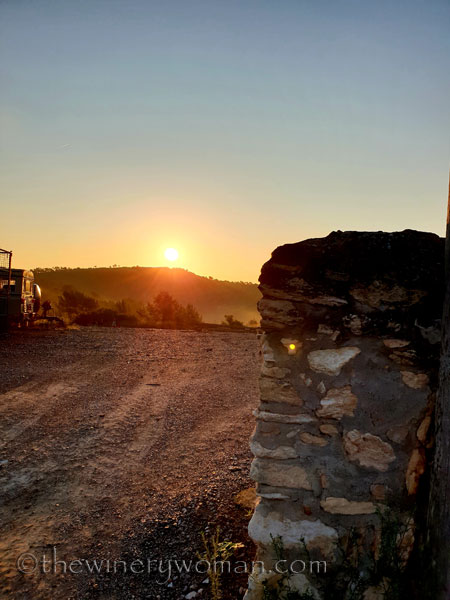