Danielle (Dani) arrived on Saturday afternoon. We came back home for a bit. A glass or two of cava to celebrate her arrival.

Then off to Sitges for the La Nit de Foc (the night of fire) for the Festa Santa Tecla. I told you about the Diables de Sitges (Dance of the Devils) performers who dance through the streets with pyrotechnics twirling on sticks back in my post about the Festa Major. Last year we were to meet a friend outside El Cable bar to see the festivities. Except there was a bit of miscommunication and we were there and he was not.  We had no idea what was about to take place. This time we were prepared.

We stopped at SuperPollo for an early dinner. Great rotisserie chicken! We always order a 1/4 of chicken, fries and a glass of cava for 5.95€ ($7.11). This is fast food in Sitges. It is always yummy!

Then we wandered through the streets and arrived just as the drummers were starting their parade. As you can see they start them young here. It is such a wonderful place to be a kid.

We made our way to El Cable – the place to gather for the night. When we arrived the square was busy but not crowded yet. 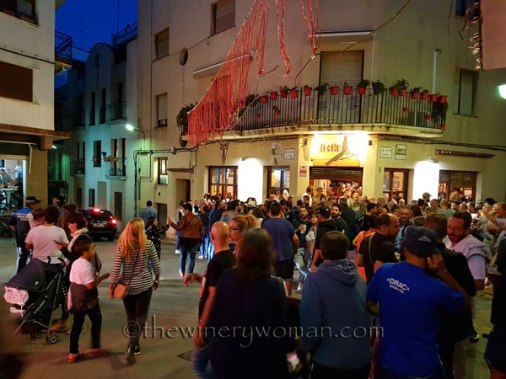 Cars were still trying to get through. As we were standing in the square Bob and I were discussing how far back up the road we would go to watch the Diables de Sitges. We knew we would not stand on the edge of the square like we did last year. A young Irish man who was standing there with his wife and two young sons started talking to us. He said he overheard us talking about moving back up the road and wondered why. We asked if he had seen this part of the Festa before and he said no. So we pointed up to the fireworks that were strung from balcony to balcony above the square and explained to him what was going to happen. Ahh…the light bulb went off. Now he understood. We had a lovely chat with he and his wife. They are from Ireland but now live in Sitges. They ended up moving back up the street thanks to our instructions.

As the area filled up there was this small group of boys who were trying desperately to see over the adults. They kept lifting each other up for a brief glimpse. 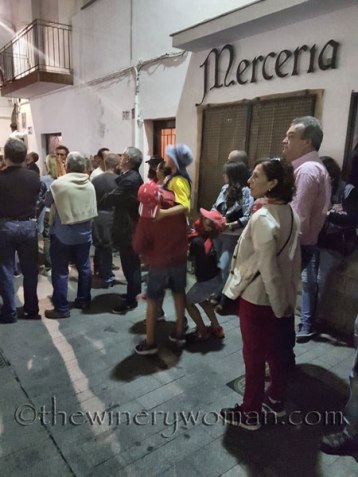 It is hard to explain to other people what takes place. It is not something that would ever be allowed in America or Australia. It is hard to describe. But wow is it something so awesome! We were much farther back then last year and found ourselves edging closer at times but still very cautious.

It is so fun watching the excitement of the little kids. Some are brave and some think they are until it starts and then want to be as far away as they can.

We enjoyed it so much more than we did last year. I’m sure by next year we will edge even closer to it. LOL.