Home sweet home. Casa sweet casa. I arrived home yesterday morning. It was bittersweet leaving America again. But oh so wonderful to be back here in Spain. Two weeks was way too long to be away from Bob. ♥

Donna and Carl dropped me off at the airport and I made my way to check my bags. I had already checked in online the night before. I went to the kiosk and after entering the information received a message that I needed to get assistance to complete the process. So, I walked up to the counter where they check your bags. Of course, a bag label hadn’t printed out because of the error message so I was told I would need to go stand in the main line for further assistance. As I arrive at the end of the line near another row of kiosks another American Airlines employee is assisting someone else on the kiosk. The lady in line in front of me explains to her that she received an error when trying to check in and I explain the same. While she assists the other lady, I decide to try the kiosk again while my bags save my place at the end of the long line. I get the same error message and the AA employee uses her badge to get to the next screen where it says that it cannot check me in because I need a visa. I explain to her that this is not true. I do not need a visa to fly to Spain. “Well, that’s what the system says so you need a visa.” is her reply. Seriously? I told her that I not only live there but have been travelling there every year for the past four years and have never needed a visa. Again, her reply is the same. She then tells me I will need to speak to Customer Service about it. I would love to tell you that this was all done with a smile on her face and an abundance of understanding to the situation but it was clear that she couldn’t have cared less. Just a tip here people…don’t get a job in customer service especially for an airline if you hate dealing with customers. It won’t be a good fit.

So, while standing in line a few of us started talking about the issues that we had at the kiosk. Several others come behind us with similar issues at the kiosk. Now, I don’t know their system but if 15 people in a 20-minute period tell you they are having issues checking in at the kiosk it might be a system issue! The line was moving extremely slowly and the lady in front of me was close to missing her flight if she didn’t get assistance soon. As we get closer to the front of the line what was four people assisting customers is now two but they are working with one customer. Seriously?! Thankfully I had plenty of time but I was a bit freaked out about the whole visa required comment. I was trying to decide whether to mention it or just state that I had an issue at the kiosk. When I finally got to the counter I decided on the latter. Within three minutes I had paid for my extra bag and was on my way. There was no mention of the visa requirement. So….hmmm…system issue? Could someone else that was standing around have assisted me and the others? Probably. At least they might have tried.

Off to TSA pre-check I go. A very jovial TSA agent greeted us. Whether he loved his job or not he certainly was determined to enjoy his day. What a change this was from the normal TSA agents. As I went through the metal detector I was pinged for a random security check. No problem. The jovial agent kept the cheerful banter going. Again, I have plenty of time so no worries. When the female TSA agent came to complete the random check, it was abundantly clear from the look on her face and her whole demeanor that this was someone who hated her job. Lovely. I removed my shoes and she tested them and a few minutes later we were finished. Now, the agents doing these searches are very serious and I get it this is a serious job but that doesn’t mean that they need to be outright rude. I then turn around to retrieve my two carry-on bags. There is one still on the conveyor belt but the other one has been pulled for a further search. Really?  The agent searched my bag but the focus seemed to only be on my jewelry carry case. This was examined very closely. Of course, there was no issue but I wonder why it raised any concern. As he repacks the bag he notices the Kermit the Frog that is in the bag. He looks at the frog, looks at me and smiles. I explained that he was a bit afraid of flying which is why he had his hands in his mouth. This brought on another smile. See, it doesn’t hurt for them to be human!

Kermit was part of my Mom’s collection. He went to live at Donna and Carl’s a couple of years ago with several of his friends. He asked if he could come home to Spain with me and live with his other friends here. Of course, I said yes! 🙂

The flight was probably a bit over half full so the trip was looking better already! There were storms on the east coast and several flights were delayed or cancelled so this is the only thing I can think of to cause this. Not complaining I had two seats to stretch across and sleep. One of the flight attendants, Mary Anne, made the trip even more enjoyable. She asked me if I was going on vacation and I explained that I had just moved to Spain four months ago. She asked if it was for work and I said, “no, my husband and I just followed our dream.” She was intrigued and said she would have to come back so that she could hear the story which she did. We had several long chats about our move and her dreams and life. I gave her one of my business cards and told her about this blog. I hope she enjoys reading it.

I arrived home to a heat wave as the temperature is in the low to mid 90’s. Not usual for here and with no air conditioning it is a bit warm but the house is still fairly comfortable. Bob isn’t complaining having just spent 6 days in not-warm-at-all (read: cold, windy, and rainy) England. Sunday is supposed to be cooler.

The best way to beat the heat as well as rejuvenate the mind and body is a visit to the beach. We were going to go yesterday afternoon but I was exhausted and we knew it would be packed especially since it is so hot. We went down to the beach about 10am this morning. It wasn’t too hot or too crowded…not at that time anyway. We spent about 2.5 hours relaxing and swimming. The water is such a perfect temperature now. We plan to return again early tomorrow morning. 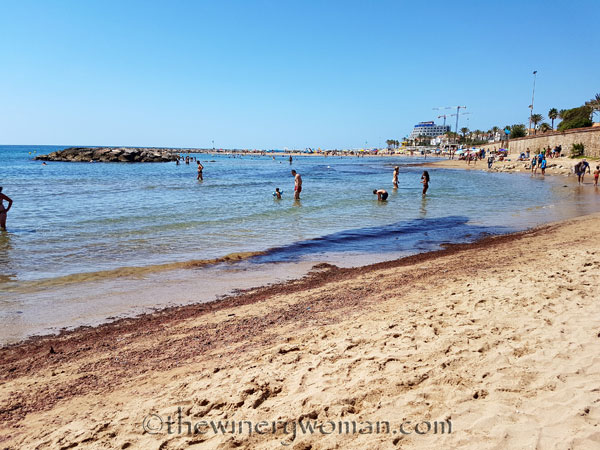 It sure is great to be back home.

2 thoughts on “It sure is good to be home”