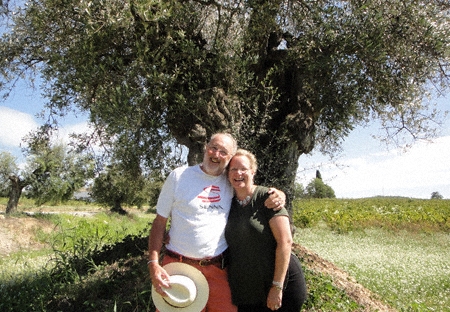 Bob is taking over the blog for today. Since I’ve told you about my falling in love with Spain we thought you should hear his story. So…here it is.

My family were a bit unusual for middle class English folk in that they ventured abroad to Europe in the late 50’s. Our first trip was three weeks camping through France, Italy, and Switzerland in a Hillman Minx with me having one year of schoolboy French and my parents having none of anything other than East London. Quite the adventure I can tell you, but it whet my appetite to travel. They continued to venture to Europe on holidays, but with their friends and not me. I had my own adventures at home without parental guidance.

In 1964, at age 18, we all drove down to Spain with my Fiancé, Sandra, in a Vauxhall Victor. No autovias and right hand drive, so still an adventure. We arrived in Lloret de Mar and found a hotel. One pound a night each full board. Amazing! The hotel treated us like Royalty as we had CHOSEN their hotel, all the other guests were on package tours. We had a great couple of weeks, fitting in a trip to Barcelona for a bullfight and some sightseeing, including the partially built La Sagrada Familia. I had not heard of Gaudi, and to be truthful I had not heard of any great architects, but the only piece of the cathedral that was finished at this time was the front entrance and the amazing towers. They left a lasting impression on a young man planning to become a civil engineer, how on earth are these standing up? And then there are colors and shapes.

Other activities included a night club, suckling pig roast, and a wine cellar where you bought a glass for around 60 cents and could sample anything you liked out of the barrels all night, and they sold great roast chicken. All very impressionable on a boy from the back end of London born after WWII. Franco was still in power at that time, so some of the obvious enforcement also made an impression. But overall, I was to begin a lifetime love of the country, its people, food, and architecture, and of course the weather.

So much so that when I married Sandra after graduating in 1968 we decided to honeymoon in Lloret de Mar, this time on a package tour including a first time flying. My boss was going on vacation at the same time and it was not until the Friday before that we found out we were both going to Lloret. What were the chances? Still, not likely to see each other, are they? You guessed it, first day walking down the main street there we all are. Only time we met though so all good, not that Gavin was someone you did not want to meet, but we were on our honeymoon after all.

Fast forward many years, I moved to Australia, lived for four years in Alice Springs, hot desert climate, and loved it. Got involved with motorsport and tracks, promoting events and eventually it all comes to a sad end. I go back to my civil engineer roots, but meet up with Kenny Roberts at the Australian MotoGP. A couple of weeks later Kenny calls, “do you want to come to Spain?” I said, “get me a ticket and I will be there.” So, the next stage of the love affair started. I packed two suitcases and left for Jerez and the MotoGP, not knowing if I was going for the weekend or the rest of my life. Turns out Kenny had plans for both Spain and the U.S. I spent most of 1992 in Sitges and Villanova, working with Chuck Aksland and Dennis Noyes on trying to organize a training camp for riders in Spain, and setting up a new Spanish Motorcycle Championship.

I loved Spain, and met a wonderful family, the Vaccaro’s, who between them ran the El Tros bar and restaurant, which was open from about 6am to 2am the next day.   Mum and Dad, two sisters Anna and Marta, and brothers Xavi and Marc, all to become lifelong friends. I guess because I was willing to try their food and adopt their way of life they took to me, and were to introduce me to some Spanish ways, some of which were perhaps a little risqué. Xavi had lived in Australia and was married at the time to an Australian girl, so we had a common bond. Marc shared a love of soccer so took me to Barcelona to watch a match from the nose bleed section among the real supporters.

All this time Kenny was planning to take on the role of promoter for the U.S. MotoGP at Laguna Seca, using me to organize it, against my best advice, but he was not to be swayed. Kenny had seen at first-hand what I had done for the sport of motorcycle racing in Australia and wanted me to do the same in the U.S. So, I was off to the U.S. Much against my will, I was very happy living in Spain thank you. There I met my now wife, Xan, and fell in love. The MotoGP was a success in most ways, except Kenny’s main man, Wayne Rainey, has an accident the week prior and is a paraplegic as a result. Obviously, not a good atmosphere for the U.S. MotoGP race, and thus the end of Kenny’s promotion career. So, I go back to Spain for a brief spell starting to organize a flat track series until that came to an unfortunate end. Back to Australia with fond memories of my time in Spain.

Fast forward again and Xan is now Mrs. Barnard and I show her Europe, mainly the UK, France, and then Spain, as has been the subject of many posts of this blog. Now a shared love, and finally the decision to exercise that love and move here, a decision long in fulfillment, but not regretted.